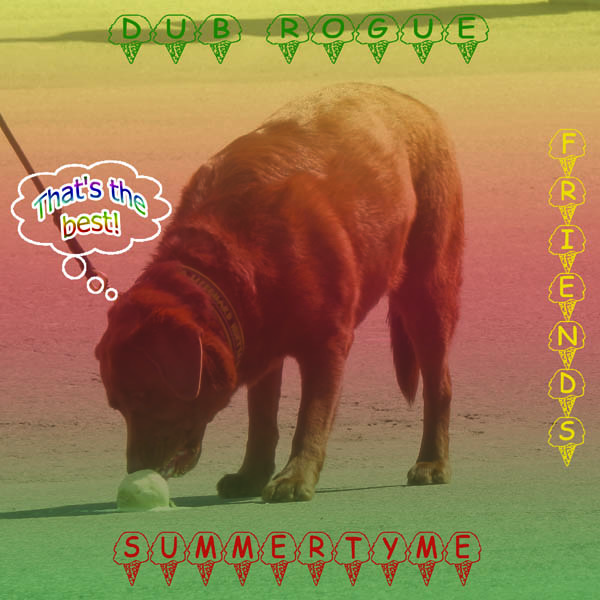 1-4:
Music by Dub Rogue
Produced and dubbed at Beyond Andromedub Studio, Suomi (2018)
Mastered by Matrix Audio

Samples compiled by The Bikini Buttocks PatrickStars
Scrambled at Beyond Andromedub Studio, Suomi (2018)

Originally, this riddim started as a spoof and was made just for fun during a whimsical night at the studio. I don't remember how it all happened. I think the inspiration came from the song "Deine Reime sind Schweine" by DJ Koze. The riddim was built and a half-freestyle, half-scripted rap was added. That must have been around 2010. Or maybe even earlier. I honestly don't remember.

Things got serious when Dubateers feat. Charlie P played a session in Berlin with MoonBass Hi+Fi Soundsystem in 2012 and we went to Dirty Ragga Squad's studio to record dubplates for MoonBass with Charlie. When there was still time, Charlie said he could still voice one more song, I played my spoof riddim, simply because we didn't have any other riddim available. Within short time, we developed the idea of a "summer style"-song with ice cream, sunshine and a "pop" feeling to it. I don't remember why. But I liked the outcome and decided to buy Charlie's vocal for an official release.

I knew that I would need some time, but I didn't expect it to take 6 years. But better late than never! That is, unless you don't like the song. Then never would be better than late. But then again, why would you even read this if you wouldn't like it? I thus assume that you do like the song.

Anyway, the riddim is the cone and Charlie P's vocal is the ice cream in it. There was some extra spice missing and it took until 2018 that Dub Flash's new discovery Mari K added some whipped cream on the ice in form of additional backing vocals that fit really nicely to Charlie's vocals.

The EP didn't quite make it in time for the 20th Dub Flash anniversary on 4th May, but only 10 days later it is finally ready. And what are 10 days compared to 6 years in the making? Negligible. Enjoy this unusual musical ice cream!